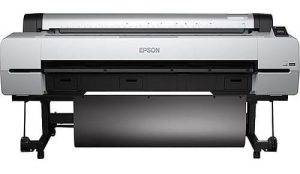 We have used Epson printers for ten years now. And we’ve always used Colorbyte Software’s Imageprint as our RIP, and their profiles. Sometimes we would send them profile targets to be made, but we never had to worry about the color. It just worked.

Now, we’ve entered into a realm that I call color hell. Nothing is matching, and Colorbyte says it’s the new Epson ink set. But we’ve started having profiles made, and have tested profiles made by some of the paper manufacturers, like Hahnemühle, Canson and Lexjet, and what we’ve found is that it’s not the inkset at all. You can get color parity between the P9000 and the Epson 9900, it just takes a little work. And we’re following that path and tweaking our color and replacing profiles one by one to get our color consistency back to where we’re comfortable.

Since we’ve entered color hell anyway, I decided to buy a Canon Pro-1000 17″ printer, thinking I would use it for cards, and see if I could get the color to match the Epson P9000 and 9900 for proofing, and then I can decide when my other Epson 9900 goes out if I want to go with an Epson P9000 or a Canon IPF series. We also work with another printer here in Seattle and do much of their camera work, and they have Canon printers, so I thought this would be a good test.

Here’s what I’ve found so far.

First, I believe the Canon has better color. The Epson P9000 has a darker black ink, and a new yellow ink (the Yellow ink has a new encapsulation). That’s great because you get a higher DMAX, but you also get muddy yellows and muddy magentas.

The Epson printers supposedly have a longer head life, but when that head goes out, you’re faced with $1000 for the head, and at least $1000 for a service call. You cannot change those heads yourself, and even if you want to tinker, it requires special SW to install a new head that only Epson technicians have. The warranty for the Epson is 1 year, and they will fix the head for free if it breaks during the first year. Note that we have gone through at least 8 Epson machines in 10 years, and at least half of the time Epson has had to come and service the machines within the first 6 months due to Epson deficiencies and defects. That’s a very high rate of failure.

You can extend the warranty for up to two more years by paying $700 per year for an extended warranty, but after that you’re on your own, and it’s usually safer to throw it away and buy a new printer.

Epson also wastes a lot of ink. We use 700 ml cartridges, and we know by weighing them how much ink is left when the printer says it’s out of ink. On average there is between 80ml and 150ml of ink left in a cartridge (see my video here: ).

The Canon  machines are designed so you can easily replace the heads. They supposedly wear out faster, but you can replace them with no trouble, and Canon guarantees the head for a year. The cost of a new head is about $500-$600, or less than the cost of an Epson extended warranty for a year. The canon printers also come with two rolls, so you can have both a matte and photo roll in the same printer at the same time and easily switch between them. Canon does not have the issue Epson has with ink changing. You don’t need to switch between photo and matte ink, so you save a lot of time and a lot of ink waste with the Canon.

At this point, we’re tending toward switching to Canon printers, although we’ll have our new P9000 and our new P5000 for at least three years (It might be worth noting that on the Epson 9900 that we lost, it had a head issue at the end of year 3 and was replaced for free, but only a year later it went out on us, and we had to replace the whole machine).

Note that Canon uses a CO cartridge (Chroma Optimizer) that does cause some bronzing issues that Canon has acknowledged, so if you’re heavy on photo prints you might want to look into that.

Note that Epson has the lion’s share of the market, so there are more Epson profiles available if you’re not building your own, or want to use third party profiles when they work.

All in all, we’re very quickly tending toward Canon as our printer of choice, but I’m sure we’ll have more to say in our blog as time goes by, and as we onboard new profiles.